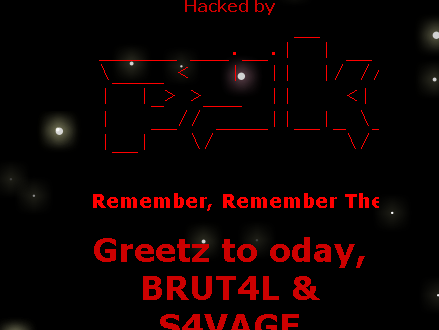 Hackers seem to have penetrated and defaced numerous NBC Web sites, including the homepage for “Saturday Night Live.”

In addition to the popular TV program’s site, NBC’s Rotoworld user forums and NBC mobile landing page were also reportedly defaced, although the forums page is currently inaccessible. Many NBC pages appear to have experienced a disruption that left them looking disorganized.

SNL’s page usual content was replaced with a deface page that stated the alleged hacker “pyknik” and scrolling text with the nursery rhyme “Remember, Remember The Fifth of November Gunpowder and Treason Plot.” The message also suggested that “user info” and “passwords” had been exposed, but it was unclear where this information was allegedly taken from.

The nursery rhyme is about a conspiracy to blow up the English Parliament in 1605.  The known member of that plot was Guy Fawkes, who’s immortalized by the use of a stylized mask in the movie “V For Vendetta.” Hackers have embraced the mask as a symbol of their activity.