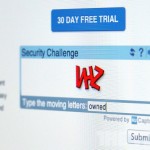 Researchers at Stanford have came across a way to breach state-of-the-security video Captchas of the class deployed from companies such as NuCaptcha with a 90% success rate.

This new video Captcha presents users with a video, which most of the time is advertisement.  Within the video is a word, or string of letters which you then have to type into a text box.

Many blieve this has solved all problems and stopped automated programs from signing up – until now.

After changing the NuCaptcha videos into individual pictures, the backdrop image was subtracted by the researchers and the left over letters became a black-and-white image to facilitate processing.

The team then applied algorithms to appoint the most exciting objects in each picture, tracking these across frames as they altered. Succeeding, they refined the amount of objects by estimating the expected minimum size of the Captcha, subjecting the remaining ones to an algorithmic program configured to distinguish rotated letters from ‘straight’ ones.

“It is with combined efforts of researchers […] that potential weaknesses are discovered and resolved, prior to them becoming practice by attackers. No single Captcha will defend against every possible attack,” NuCaptcha said.