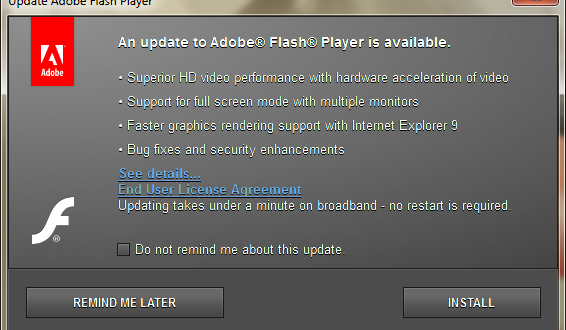 Security researchers are warning of a false Adobe Flash Player update extension whose goal is to serve spam ads to the victims.

The malicious plug-in, dubbed FlashPlayer11.safariextz, and was discovered my Malwarebytes.  It is being distributed from mostly pornographic sites, according to Jerome Segura of security firm Malwarebytes. Unsuspecting users are assured they need to “install this update for Flash to view this video”, but it’s in reality, a malicious file.

This new threat is “widespread”, according to a spokeswoman for the company, which is monitoring the outbreak.

“For example, I visited PBSKids.org, a site for children to play games and watch their favourite characters, when all of a sudden a pornographic advertisement was displayed,”

It’s not just obscene ads being dished out, either. This new malware, not affecting Internet Explorer (for once), but is being spotted in Chrome, Safari and Firefox – is also capable of superimposing junk e-mail ads over legitimate ones.

“Online advertising is a billion-dollar industry, and everybody wants to have a piece of it,” Segura wrote. “With such invasive adverts, cyber crooks are likely to generate a lot of views and even pay-per-clicks. If you believe you are seeing strange or inappropriate ads on the websites you regularly visit, it wouldn’t hurt checking the extensions installed in your browser and removing the offending ones.”