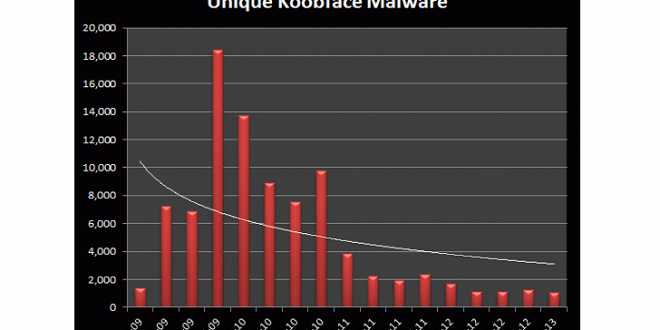 McAfee released its threats report for the first quarter of 2013. According to the article, the Koobface worm, which spreads on social networks, has been on the rise.

It’s come to light that it Is not so. In a blog post released on Friday, the company acknowledged that it made a mistake regarding the Koobface count.

The Koobface malware has in reality remained on a decline which began a year and a half ago when Facebook updated.

“Besides the number of changes made to a malware’s code base, sample counts can also be influenced by repacking of the same underlying code (a common evasion tactic used by malware distributors), garbage data or junk instructions added to binaries, and other forms of server or client polymorphisms,” said McAfee’s Craig Schmugar.

“Another complication arises from what is often called a cocktail, in which a parasitic virus inhabits a host file that is itself another piece of malware.”