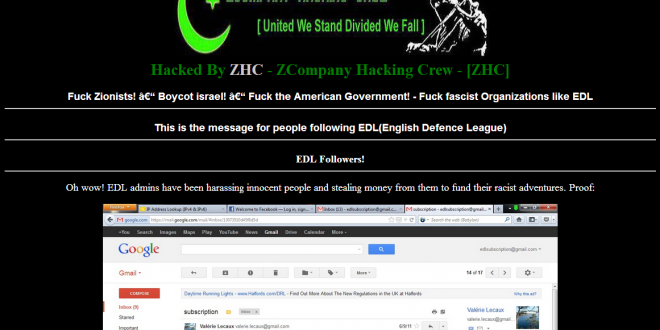 @Z_H_C_ or ZCompany Hacking Crew (ZHC) hacked and defaced the website of English Defense League and published e-mails from the organization’s Gmail account.

“The hackers accuse the site’s administrators of ‘harassing innocent people and stealing money from them to fund their racist adventures,'” writes Softpedia’s Eduard Kovacs. “To demonstrate their point, they’ve published screenshots of emails in which individuals are complaining that they have been tricked into subscribing to the English Defence League (EDL) website. Furthermore, some claim that their credit cards have been illegally utilized to make donations.”

At the time of the publishing the deface page is still up on Englishdefenceleague.org.

Text in their deface page: