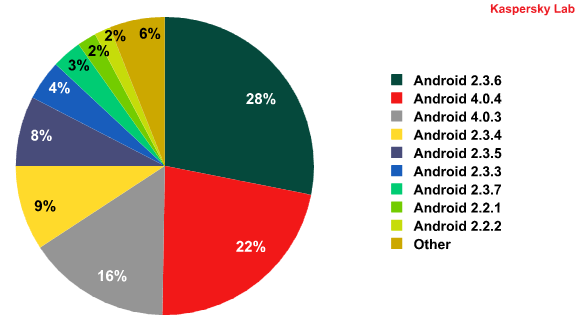 Malware targeting Gingerbread more than any other OS

Analysis of mobile malware for Android operating systems by Kaspersky Lab experts in Q3 2012 unveiled that the most common targets among cybercriminals were Android versions 2.3.6, or ‘Gingerbread’, and 4.0.4, a.k.a. ‘Ice Cream Sandwich’.

The speedy development in the quantity of new mobile malevolent programs for Android carried on in the third quarter, motivating the specialists at Kaspersky Lab to name the platform versions most often targeted by cybercriminals.

Android 2.3.6 Gingerbread added up to 28% of all stopped attacks to install malware, while the second most typically attacked version was the new 4.0.4 Ice Cream Sandwich, which accounted for 22% of attempts.

More than one half of all malware detected on user smartphones turned out to be SMS Trojans, or malicious programs that steal money from victims’ mobile accounts by sending SMS messages to premium rate numbers.