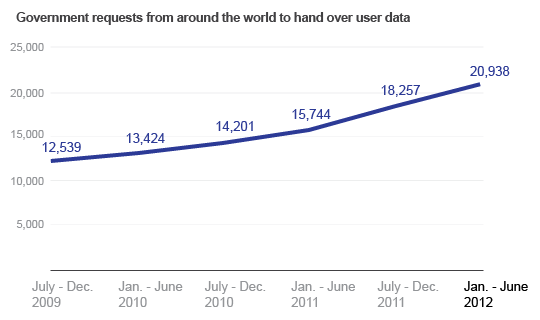 Google is getting more government requests for user data than ever before.  In google’s article they released that there were 20,938 inquiries from government entities around the world. Those requests were for information about 34,614 accounts.

The quantity of government requests to withdraw content from Google services was not a problem from 2009 to 2011. But it has spiked in this reporting period. In the beginning of 2012, there were 1,791 requests from government officials around the world to remove 17,746 pieces of content from Google’s search engines.

The United States led the way, making 209 requests during thatperiod. Germany, Brazil, Turkey, and France where also up there.

The information we disclose is only an isolated sliver showing how governments interact with the Internet, since for the most part we don’t know what requests are made of other technology or telecommunications companies. But we’re heartened that in the past year, more companies like Dropbox, LinkedIn, Sonic.net and Twitterhave begun to share their statistics too. Our hope is that over time, more data will bolster public debate about how we can best keep the Internet free and open.